In the senior race, Groups 1 and 2 managed to stay clear this week with Brendan Harte of Bohermeen winning the sprint. Once again Seamus Connor of Drogheda Wheelers won the underage race.

Racing for senior and underage riders is scheduled as follows:

A route map is available here

Well done to Mark Heather of Clontarf CC and to Seamus Connor of Drogheda Wheelers who won the senior and underage races respectively in Round 4 of the Mark Mullen League.

Attention A2, A3 and A4 riders

Well done to our three riders who travelled to Mullagh in Cavan to compete in the Moynalty GP.

Seamus Connor rode the U12 race (1 lap of an 8.3km circuit). He took control from the halfway point and three others came with him. It wasn’t long before he shook them off and came to the big finishing climb all on his own. He crossed the line with about 25 seconds of an advantage over Navan rider Lenehan. That was Seamus’s first win outside of the Mark Mullen league. So well done Seamus. 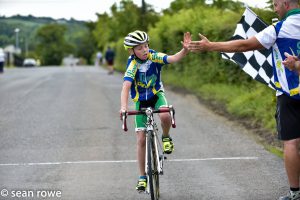 Seamus Connor solos to victory in the under 12 race.

In the U14 race, Ciaran Connor was the club representative. At the end of the first lap, the two leaders had a big advantage over a group of six riders, with Ciaran about 50 meters further adrift. But he dug deep and with the experience he gained in cornering and descending in the Mark Mullen league, he was back in the group within a km. Coming over the line for the 2nd time, Ciaran was fourth on the road and looking comfy in a group of seven. He stayed in the group and was there at the bottom of the final climb. He gave it everything and came out with a 6th place overall, managing to beat some of the group up the hill. Excellent result for Ciaran.

In the U16 race, we had James McMorrow. Again as in the U14 race, there was two away at the front. James was in the chasing group. A Bohermeen man, tried to bridge across the gap, but was brought back by James and the group. On the final lap, the two leaders stayed away, but it was all to play for in the chasing group. They raced up the climb for the last time and it was the strong Bohermeen rider who led them. James chased hard, passing several others in a bid for third place. But it was to no avail as the Bohermeen man just held him off by the width of a tyre. So a very impressive hard earned 4th place for James.

Niall Craven of Drogheda Wheelers won this week’s senior race, his second victory in a row in this year’s league. In the underage event the win went to Pearce Gorman of Stamullen.

Liam Hanley of Lucan took victory in the first round of the this year’s Mark Mullen League. Seamus Connor of Drogheda Wheelers won the underage race.

Our annual Mark Mullen League gets underway again on Monday 19th June. Racing will take place at 7:30 each Monday night for six weeks in total. Each race consists of 5.5 laps of the Donore Circuit. All races are run on a handicap basis and are an ideal opportunity for those who’ve never raced before but would like to give it a try. Anyone wishing to race must hold at least a Cycling Ireland Club competition license (club members who have non-competition licenses can upgrade by applying to Cycling Ireland).

Riders must ride in a minimum of 3 rounds to be eligible for overall prizes. Riders who ride all 6 rounds will have their best 5 results count.

There will be a club meeting next Wednesday (June 7th) at 8:00 pm in the Thatch Bar. The purpose is to prepare for the upcoming Mark Mullen League which will run from Monday June 19th until Monday July 24th inclusive (total 6 x Mondays) and any other business members would like to discuss.

We would urge all race / committee members to attend so that arrangements can be finalised as early as possible. Full details regarding the league will be published here as soon as possible.