Click here for the overall standings. Huge thanks to Kay Howard from Stamullen Road Club for compiling our league tables. 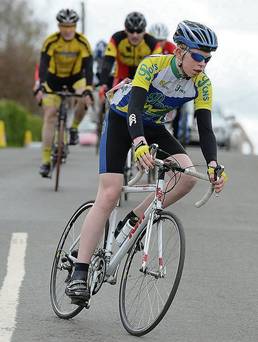 Well done to Simon Jones who finished second in the junior category at the Leinster TT Chamionships last Friday (June 19). The event was promoted by Cuchulainn CC and took place along the usual 16km course starting at Felda Gym, going out to Castlebellingham and back in again. Simon completed the distance in an impressive 24:35.

The Mark Mullen league got underway on Monday evening. Pleasant conditions for racing meant a strong turnout at the Donore circuit. The handicapper divided the field into four groups, which set off at intervals of roughly two and a half minutes. After a hard fought race it was Stamullen rider Gary Gorman who took victory from teammate Craig Sweetman with Mark McGauley (SCOTT DLCO) third.

Drogheda Wheelers’ annual Mark Mullen League gets underway again on Monday 22nd June. Racing will take place at 7:30 each Monday night for six weeks in total. Each race consists of 5.5 laps of the Donore Circuit. All races are run on a handicap basis and are an ideal opportunity for those who’ve never raced before but would like to give it a try.

Riders must ride in a minimum of 4 rounds to be eligible for overall prizes. Riders who ride all 6 rounds will have their worst result deleted (best 5 results to count).

Our new club kit from the Spin11 Elite race range is now in stock.

We also have some remaining older stock from the Spin11 Elite Range. These items are all brand new but available at reduced cost.

Second place for George in Dunsany

Drogheda Wheelers rider George Devin produced another fine performance to take second place in the Dunsany GP A4 race. On a fast but rolling circuit, George was well placed throughout, winning the bunch sprint and narrowly failing to catch Mark Holland (Orwell Wheelers) who attacked in the last few kilometres. The result will see George progress to the A3 ranks, the second Drogheda rider to do so this season, joining Dermot Healy who had two podium finishes earlier in the year.

The A3 event was won by Sean Moore of Barrow Wheelers.

With stage 7 of this year’s Rás finishing in Drogheda, we’ve even more reason to get excited about the UCI ranked event, with news that our very own Daragh Campbell will be among those riders representing the Team Novo Nordisk development squad. Team Novo Nordisk is a global all-diabetes sports team of cyclists, triathletes and runners, spearheaded by the world’s first all-diabetes professional cycling team.

Daragh joined the US based outfit shortly after completing his Leaving Cert in 2014. He made an instant impact, notching up four podium finishes : two wins at the Pisgah Omnium and two third places at the Georgia Games Road Race and Criterium.

The Team Novo Nordisk development team is excited to race at An Post Rás. Our goals are to land a podium in a sprint stage and to place top ten in two or more stages. We will be looking for results from both Quentin and Mehdi in sprints and also to raise awareness with our local Irish rider, Daragh.

The Dunsany GP will go ahead on Sat May 9th. After what we consider two weekends of successful promotions, in Stamullen and Drogheda, its probably a good time to put on races in this area as there were no issues with the law or authorities over the past two weekends.

To keep it that way we would appreciate all the help we can get for this one. Thanks in advance.

Sign on will be in Dunsany GAA grounds from 9.00am.
Route will be the usual green sheds circuit with the last lap coming off circuit to finish at the church in Dunsany.
10.3Oam A3/Jun race 4 x laps of 17k Total 68km
10.33am A4 race 3 x laps of 17k Total 51km.
Please note its a 10.30 start time to have the roads as quiet as possible.
Get in touch if you can help.

Midweek race training sessions will take place each Wednesday evening for the remainder of the season. The first session will be on May 6th at 7.00 pm. The meeting point will be at Beamore Cross.

Drogheda Wheelers’ Race night will take place in the Thatch Pub, Donore Road on 9th October 2015. Sponsorship cards are now available. All proceeds will go to the club. The event will be followed by our club social night, a great opportunity for all our race and leisure members to get together.