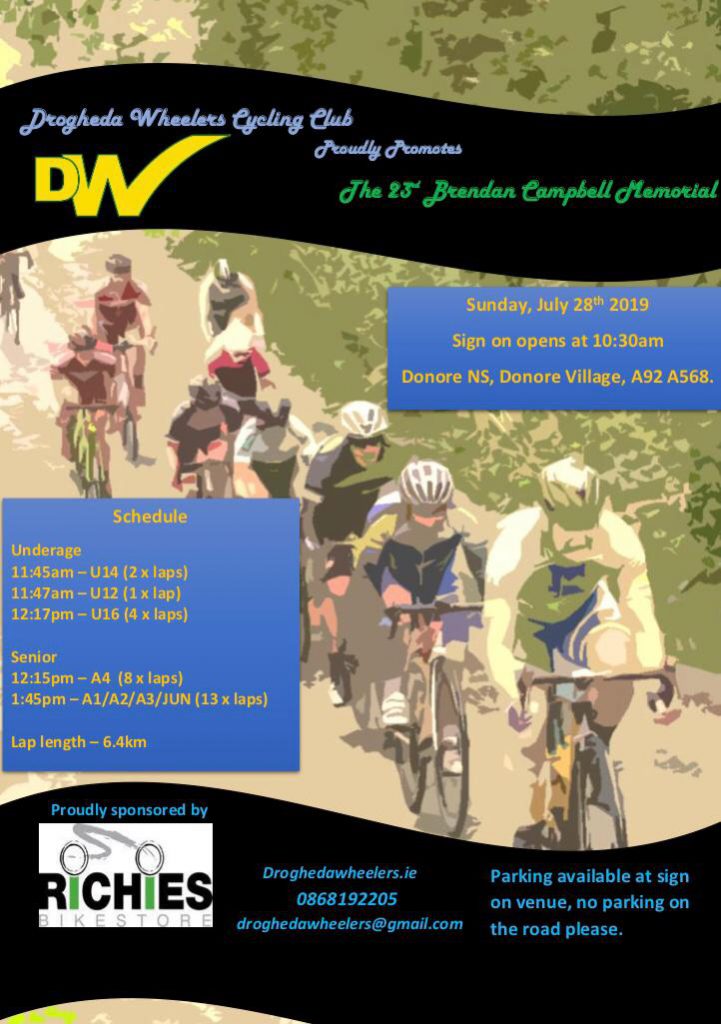 Racing for senior and underage riders is scheduled as follows:

Sign on and off road parking at the school grounds. No on circuit parking allowed.

Category prizes will be awarded for all categories.

All races will take place on the usual 6.4km circuit.

Shane Coll of Drogheda Wheelers won Round 5. The 12 points sees him go top of the overall standings with just one week remaining. Liam Hanley of Swords finished second with Terence Diehl of Drogheda third. 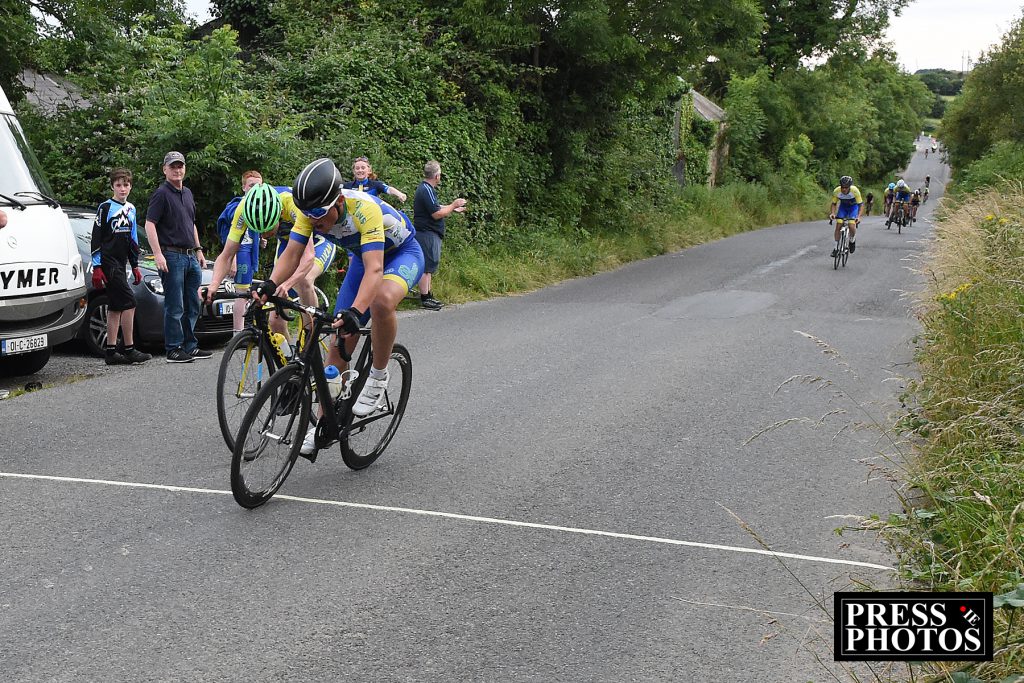 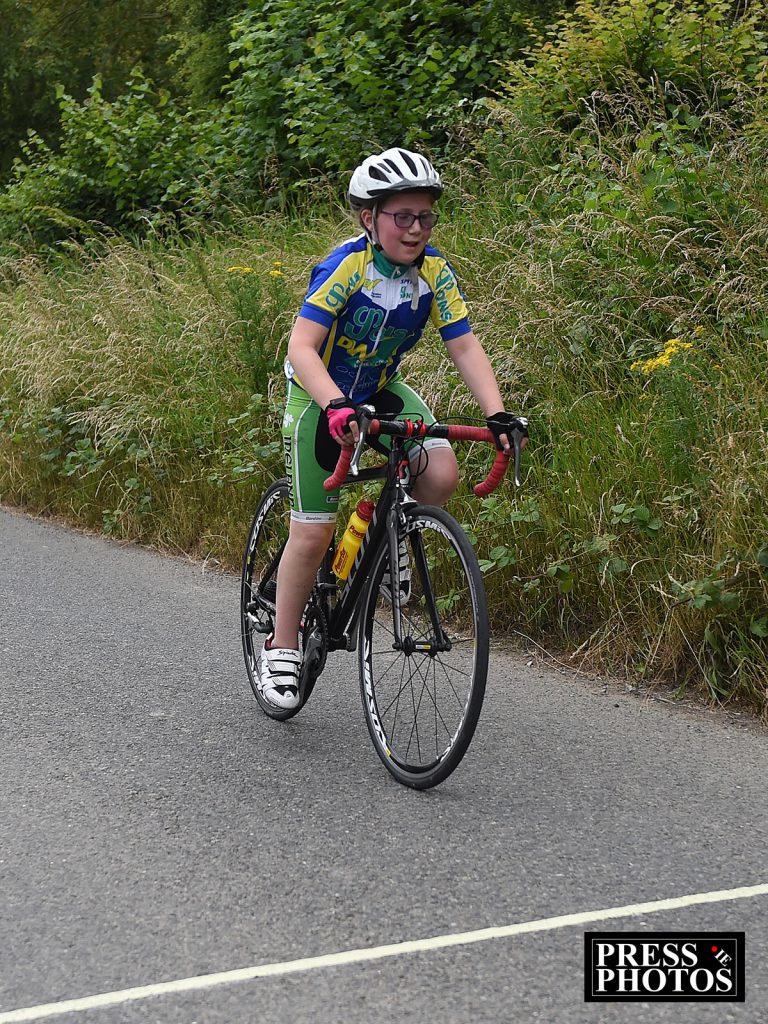 Joann Connor crosses the line to win round 5 in the youths section of The Mark Mullen League hosted by Drogheda Wheelers in Donore. Photo:Colin Bell/pressphotos.ie 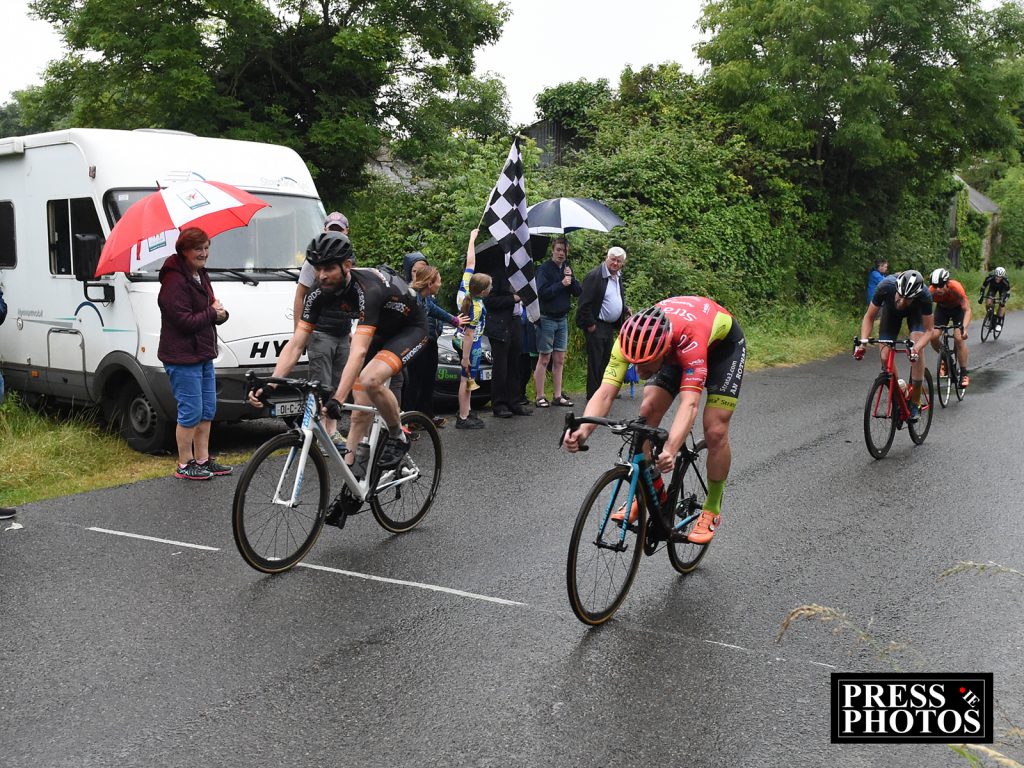 In the underage race, there was a third win for Conor Murphy, with Niall Browne second and Joann Connor third.

This week’s senior race was won by Craig Sweetman of Stamullen with Paul Norton second and Shane Coll third.

In the underage race, Conor Murphy took his second win ahead of Niall Browne and Daragh Peters.

Posted in Club, Racing, youth | Comments Off on Mark Mullen League 2019 Round 3 Results

In the underage race, Niall Browne of Drogheda Wheelers won, ahead of teammate Daragh Peters with Conor Murphy third.

Meanwhile in the underage event, Conor Murphy of Rostrevor Mountain Bike Club won ahead of Niall Browne and Daragh Peters (both Drogheda Wheelers)

Our annual Mark Mullen League begins on Monday 17th June. Racing will take place at 7:30 each Monday night for six weeks in total. Each race will be just over 6 laps of the Donore Circuit.

Riders must ride in a minimum of 3 rounds to be eligible for overall prizes. Riders who ride all 6 rounds will have their best 5 results count.

As always, we ask all competitors and spectators to be mindful of the needs of local residents when parking on or near the circuit.

Posted in Uncategorized | Comments Off on Mark Mullen League 2019

It is with great sadness that Drogheda Wheelers Cycling Club announce the untimely death of its member, Sean Lynch following a tragic accident. The club would like to take this opportunity to thank all the medical staff who cared for Sean following the accident and expresses its gratitude to Wexford Wheelers Cycling Club for its support during this difficult time. Drogheda Wheelers would like to extend its sincere sympathies to the Lynch Family. Our thoughts and prayers are with you all.

Posted in Club | Comments Off on Sean Lynch R.I.P.

Due to unforeseen circumstances here in Drogheda Wheelers, the Dunsany GP scheduled for this Saturday, May 11th, is postponed. It is the hope of the club that we will be able to reschedule and run the event at a later date but we feel we have made the correct decision in light of recent events.