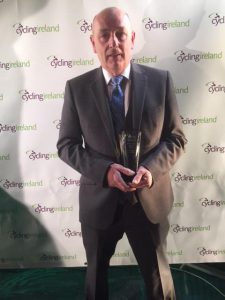 Congratulations to Gerard Campbell, long serving secretary of Drogheda Wheelers on his recent induction into Cycling Ireland’s Hall of Fame at the annual Cycling Ireland awards. Gerard is a hugely popular figure in Irish cycling and this honour is recognition of his dedication and commitment to the sport over the last number of decades. Gerard has worked tirelessly not only for his club but also at provincial and national level, not least through his 40 year involvement in the Rás – Ireland’s international cycling race. Gerard has also recently been appointed to the newly established Cycling Ireland road commission. He now joins a very exclusive list of Hall of Fame inductees. Well done on this tremendous personal achievement!

This entry was posted in Club, Events. Bookmark the permalink.
Click here to cancel reply.